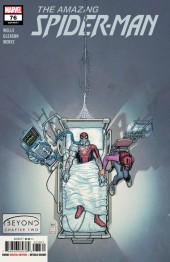 BEYOND, CHAPTER TWO
The unthinkable has happened. Zeb Wells and Patrick Gleason will remind you why you love (and hate) comics. 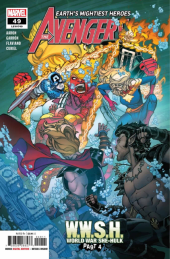 WORLD WAR SHE-HULK, PART FOUR: THE BOMB BENEATH THE WAVES
“WORLD WAR SHE-HULK” Goes Nuclear! War beneath the waves. The Winter Hulk has been sent to Atlantis with a dark mission. And things will get even darker and bloodier if the Russian super-assassin Red Widow has her way. But no matter who wins, She-Hulk and the Avengers will be changed forever! And next month, it all explodes in AVENGERS #750! 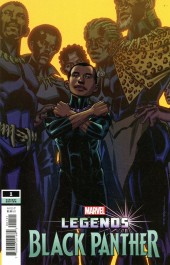 Dive into the legend of the Black Panther in this new origin story by acclaimed author Tochi Onyebuchi and New York Times-bestselling illustrator Setor Fiadzigbey, perfect for middle grade readers! T’Challa and Hunter are brothers growing up in the idyllic royal palace of Wakanda. Theirs goes beyond the usual sibling rivalry, though—Hunter, although older, is adopted, and T’Challa is the true heir to the throne. Both brothers wrestle with fairness and the future, readying themselves for responsibility, when tragedy strikes and takes the choice from them. This new series, ideal for young fans and loyal readers alike, will explore the moments that make T’Challa who he is, from his adventurous upbringing to his walkabout as a teen where he meets the enchanting Ororo Munroe before she becomes the legendary Storm, to when he first invites the Fantastic Four into Wakanda! Son, Brother, Warrior, King—as each chapter unfolds, new pieces of T’Challa’s character will be revealed and the Black Panther will emerge. 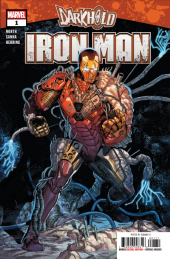 Ryan North turns his talents to a brand-new genre! Called forth to face the dread god Chthon, Iron Man reads from the ancient ill-fated text the Darkhold…and it changes the course of his entire life. The armor that has saved him countless times is about to become a prison—one whose only escape is a fate worse than death. The brilliant comedic mind behind The Unbeatable Squirrel Girl and Dinosaur Comics brings you the body-horror tale of the century!! 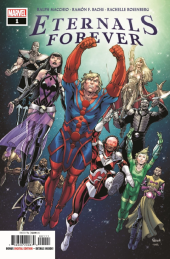 IKARIS, AGENT OF THE DEVIANTS?! The Deviants have captured Ikaris! Now under their control, Ikaris has been brainwashed into assassinating Ajak! It’s up to Gilgamesh and Sprite to stop him and prevent all-out war between the Eternals and the Deviants! 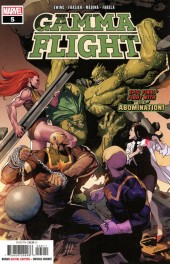 WE WERE TRANSFORMED
THE REVELATIONS OF RICK JONES! Rick Jones is one of the oldest, most beloved sidekicks of the Marvel Universe. Del Frye is a high school hero with a horrific past. Together they are… what? Meanwhile, in the pulse-punching finale of the battle with Abomination, new gamma mutate Dionne discovers untapped strengths — but will it be enough to take down the monster who made her? The future of gamma is at stake, and no one will emerge unscathed… 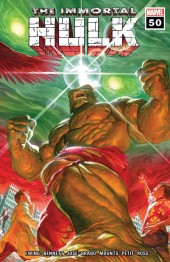 OF HELL AND OF DEATH
THE GIANT-SIZED FINALE! Down in the Below-Place, the Hulk searches among the ghosts of the past for the answers to all his questions. The One Below All, the Green Door, Samuel Sterns, Jackie McGee and Bruce Banner. It’s all been leading here. This is the last issue of THE IMMORTAL HULK. 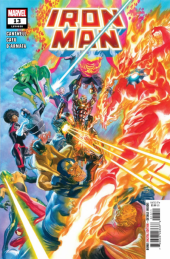 THE GREAT I-M
The epic showdown between Iron Man and his allies and Korvac and his cohort continues aboard Galactus’ worldship! Reinforcements have finally arrived, and Tony Stark now stands a better chance of stopping Korvac from accessing the Power Cosmic and becoming a power-crazed god all over again! Can Tony—and War Machine, Hellcat, Scarlet Spider, Frog-Man, Gargoyle, Misty Knight and Halcyon—end this fight once and for all? Or are things about to get a whole lot worse? And if they do, will Tony be forced to make a choice that alters the course of his very human existence forever? 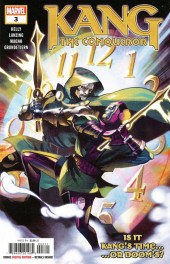 ONLY MYSELF LEFT TO CONQUER, PART THREE
Young Kang stalks his future self to the site of his first major battle with the Avengers, hoping to change the course of his destiny once and for all. But the fate of the villainous Doctor Doom has long been entwined with Kang’s—and no one interferes with Victor Von Doom’s timeline but Victor Von Doom. It’s Kang vs. Kang vs. Doom—with the future of the universe on the line! 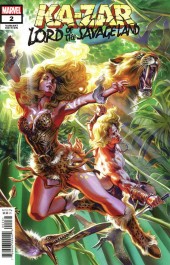 Change has come to the Savage Land! Ka-Zar and Shanna can feel it, as the Plunder Family travel in hopes of protecting their lands from a mysterious illness that plagues the forests. But will Ka-Zar be able to rise as champion of the Savage Land, or will his past be the downfall of the Savage Land and his family? 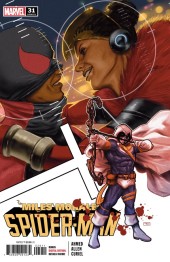 It’s a date night for Spider-Man, and no one informed Taskmaster that three’s a crowd. Why does the greatest mercenary in history have Miles in his sights? Can Tiana Toomes, A.K.A. Starling, do anything to keep her new beaux alive? Relive the first appearances of your new favorite super hero as we celebrate the legacy of the House of Ideas with MARVEL TALES! This anthology series shines a spotlight on fan-favorite characters, features timeless stories, and highlights some of Marvel’s most impressive talent from the past eight decades! And now Kamala Khan claims the spotlight, beginning with a scene-stealing cameo in her idol Carol Danvers’ book, CAPTAIN MARVEL (2012) #17! Then, G. Willow Wilson and Adrian Alphona put the Pakistani-American teen sensation center stage as the new Ms. Marvel in a landmark story from ALL-NEW MARVEL NOW! POINT ONE. But how did Kamala get her amazing, shape-shifting, size-changing powers? Find out in Wilson and Alphona’s now legendary MS. MARVEL (2014) #1-2 — as Ms. Marvel learns that the life of an embiggened Inhuman hero comes with big problems! 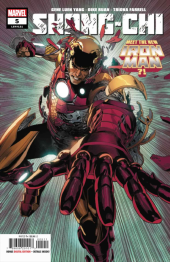 SHANG-CHI VS. THE MARVEL UNIVERSE, PART 5
MEET THE NEW IRON MAN…SHANG-CHI?! A weapons dealer offers up a stolen Iron Man suit to Shang-Chi’s organization. But will Shang-Chi take it to use in his war against crime? And what will Tony Stark have to say about it?! 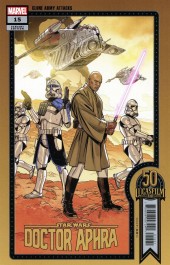 PARTY FAVORS
CRIMSON DAWN is back, and DOCTOR APHRA is trapped aboard their ship! What treasures lie aboard the VERMILLION? And what price will Aphra have to pay to obtain them?

WAR OF THE BOUNTY HUNTERS TIE-IN 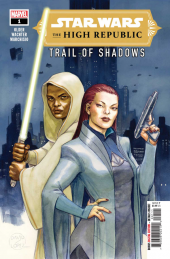 JEDI KNIGHT AND PRIVATE EYE TEAM UP TO UNCOVER A MYSTERY THAT WILL CHANGE THE HIGH REPUBLIC FOREVER! A Jedi Master is dead. Another is in a state of complete shock. It’s a murder the likes of which the Jedi Order has never seen before. There are no leads. There are no suspects. There is no motive. But Jedi Investigator EMERICK CAPHTOR must solve the case before it’s too late. The fate of the Jedi, the Hutts, the Nihil and everyone in the galaxy, hangs by this tangled thread of lies and deceit. Emerick will need to dive into the darkness, testing himself and his Jedi ideals like never before. He’ll need help. Luckily, Private Eye SIAN HOLT lives in the dark. Together, they’ll follow this trail of shadows wherever it leads. If they can work together, that is. 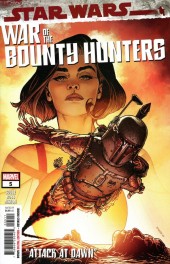 WAR OF THE BOUNTY HUNTERS, PART V: ATTACK AT DAWN
THE ULTIMATE FINALE! THE BIGGEST EVENT OF THE YEAR CHANGES THE FACE OF THE GALAXY! Everything and everyone in the galaxy is against bounty hunter BOBA FETT, from Sith Lords to Hutt rulers to the mysterious CRIMSON DAWN. He can’t succeed. There’s no way he can regain HAN SOLO, escape the bounties on his head, and survive to get his prize to JABBA THE HUTT and get paid. But HAN SOLO belongs to him, and no one will take him away. With a shocker of an ending that sets up a revolutionary new status quo for STAR WARS COMICS! 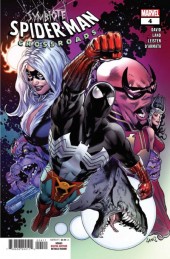 ENTER: THE ETERNALS! SPIDER-MAN and THE INCREDIBLE HULK join forces with the DEVIANTS! Wait, that can’t be right…can it? 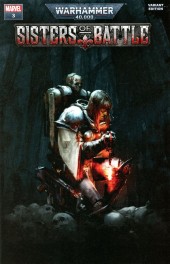 DAYS OF DEATH AND MIRACLES! A death in VERIDYAN’S ranks sends shock waves through the squad! Still, they travel deeper into the tunnels of Siscia…and only a miracle can save them now. But the Sisters’ faith in the Emperor is never shaken—even in the face of CHAOS! 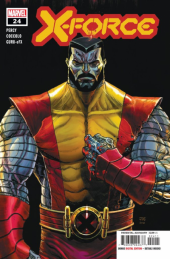 THE PEN IS MIGHTIER THAN THE CEREBRO SWORD
BIG BROTHER! MIKHAIL RASPUTIN’s nesting doll agents have infiltrated Krakoa before, but never like this. If BLACK TOM can’t root out their invasion of BEAST, the consequences go beyond mere death. Time for PIOTR RASPUTIN, A.K.A. COLOSSUS, to step in. 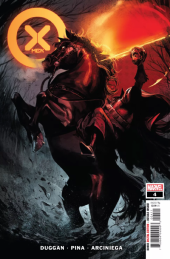 FEARLESS, CHAPTER FOUR: NIGHTMARE ON 86TH STREET
HEADS UP! It’s Halloween and the X-Men have to face a horror born of a neighboring town in Westchester…the Headless HORSEMAN?! And that’s not the only terror targeting them…