Very large, grade B catfish that cyber statutory raped our very own Rocketman. Managed to go undetected for quite some time and caused a number of meltdowns, many of which were its own. Never used false images or another person's nudes though. Caught in 2010 but released until finally finding itself trapped in the nets of the trawler called The Soapbox sometime in 2013.

Grade C catfish that had a number of simps thirsting for it, despite never sharing any false images or nudes. Although entertaining, it was too short lived, too invested in its delusion, and got too butthurt when finally rumbled, to score more highly. Caught in 2014 by one of IMDb's prolific anglers, Hungry in Conway.

Grade C catfish that wielded considerable power for a short time. Ran amok on several boards collecting fans and enemies without needing to share any nudes. Eventually destroyed due to multiple attacks from the TWD and Expendables boards. Caught in 2012 by an angry mob somewhere off the banks of the river that flows between the TWD board and the Expendables board.

Grade B catfish that's overly invested in its deception. Lacks the entertainment value of other catfishes and has broken the unwritten rules of the game by using false pictures and nudes. However, simply has to be respected for its resilience and longevity. Has been caught numerous times since 2017 but is always released back into the wild.

Who in your opinion is the greatest IMDb catfish, and why?

Member since August 2, 2020
i'm resilient and still here bc i have nothing to fear from ur witch hunt nor to lose in our battle. i know who i am and what i did. i'm not using these boards to find friends for life or even a romantic partner or anything like that. i'm just here to post dumb stuff and occasionally discuss things. as i've always done so. so there's nothing to lose for me. u on the other hand might lose ur face and credibility. ur accusations are all baseless and null, u haven't backed up anything u've said about me so far. i wonder why? oh wait, right, u got nothing.

i have started a query on different other boards asking the people what they think of me and if they believe u. i have also messaged a couple of friends privately asking them to speak up. so far i got nothing but support and reassurance in their trust. hmmmm..

u know, historically, witch hunts were a serious, officially endorsed attempt at a muggle genocide of magical but totally innocent beings. using such language to imply that any criticism of u is equivalent to action that saw unicorns and griffins being hunted to the point of extinction is highly insensitive and offensive to anyone who partakes here. it makes u look like the creepy villain, blinded by rage and a bloated ego who is obsessed with me, the victim. this is ur 2nd thread about me today.

sucks for u tho that nothing u say has value. u could as well put one of Mange's guns in ur mouth and no one would even care. 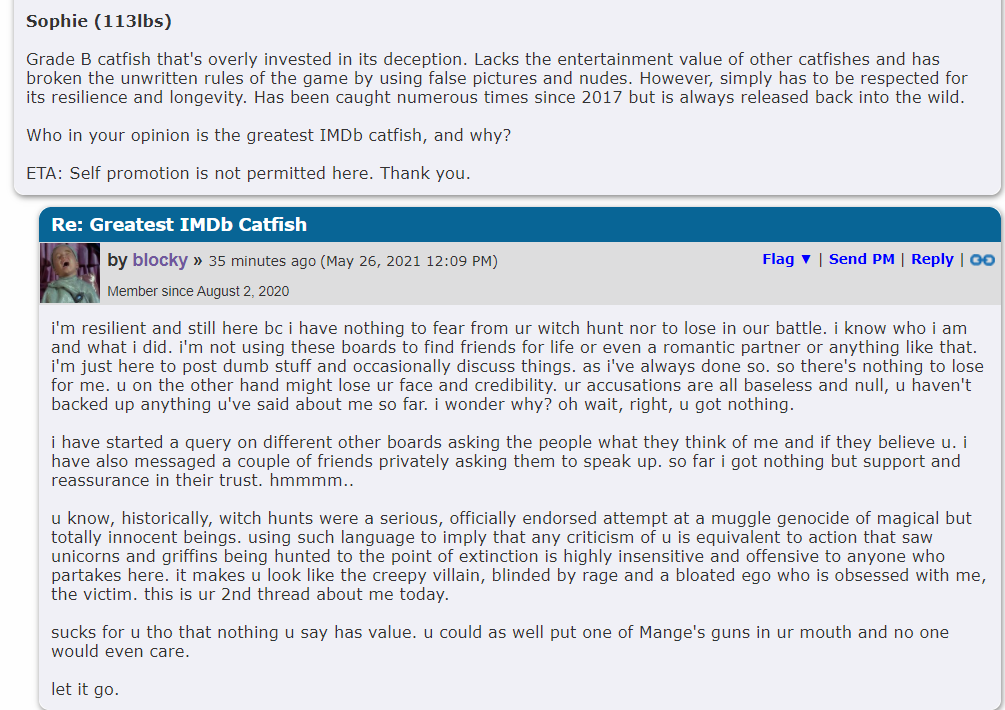 These violent delights have violent ends.

Member since May 24, 2021
Nah, from what I've observed, Sophie doesn't appear to be a catfish. Then again, if she is (and I am NOT saying she is), there are a lot of horn dogs acting stupidly.

PAGG - a/k/a goodgirl - now, THAT was a GREAT one! Fun to watch and humorous by leaps and bounds. And he owned up to it, and didn't give a shit!

Ah, those were the good old days.

What's really funny is the blame being put on the catfish rather than the idiots who fall for that shit! What a bunch of morons!

What's really funny is the blame being put on the catfish rather than the idiots who fall for that shit! What a bunch of morons!

Member since August 2, 2020
also u forgot Karliah, u sloppy bitch