The Sailor Who Fell from Grace with the Sea (1976)

Member since September 30, 2017
The movie is based on the book by the renowned Japanese fascist author Yukio Mishima. It starts Kris Kristofferson and covers one of Mishima's usual themes, the jealous possessive adolescent.

Widowed now for close to four years, Anne Osborne, who now operates the antiques shop formerly owned by her husband David, and their son, Jonathan Osborne, live in a small, English seaside town. Both Anne and Jonathan still miss David even after all these years. Going through puberty, Jonathan uses something he finds in his bedroom to explore the emerging thoughts of sexuality going through his mind. Although Anne knows Jonathan sneaks out of the house early in the morning against her orders, she is unaware that he is attending meetings of a secret society of five boys, who refer to each other only by a cardinal number, their rank within the group as assigned by "The Chief", number one. The Chief is an arrogant, sadistic pseudo-intellectual who needs to show his power and dominance over the other four in whatever means possible. He largely considers them immature as he spouts off his Nietzschean philosophies, centering on that adults create rules that ultimately disrupt the natural order of life. When the US based merchant ship the Belle docks in port, Anne and Jonathan meet Second Officer Jim Cameron. Jonathan, who is fascinated by the sea, becomes enamored with what Jim represents to him, the natural order the Chief speaks of, specifically of the sea. Anne becomes romantically involved with Jim while he is in town. Their encounters lead to Jim critically evaluating his life and future. As Jonathan believes Jim may be attempting to disrupt that natural order he so admires, Jonathan believes it is his duty to change Jim back to restore that natural order, and if that is not possible, to correct the impending disorder by whatever means necessary.

Member since May 15, 2018
I haven’t seen this but it was controversial when it came out and the first time I noticed the name Mishima.

Member since September 30, 2017
I admit I haven't even read the book. Hearing about the movie I thought it might be a heterosexual romance, kinda like that song "Brandy". Lol.

I've read Mishima's "Forbidden Colors", "Confessions of a Mask", "The Sound of Waves".
Administrator
"filmboards is a bold experiment in free speech and anarchy"
I GameBoy

Member since May 15, 2018
There’s a short film he made on YouTube along with some of his acting roles. His Yakuza films were more mainstream than you’d expect but I suppose he did them for the money.

Member since September 30, 2017
The crime syndicate movies seem suited to his macho persona. This is one reason why I am fascinated by Mishima. His was a completely masculine homosexual aesthetic. That's rare now.
Administrator
"filmboards is a bold experiment in free speech and anarchy"
I GameBoy

Member since September 30, 2017
I never thought Bowie's films were anything special. Jagger did quite a few movies and none are memorable.

Kristofferson transitioned over into moves rather well though. If you look him up he did dozens of popular movies. "Sailor" was one of his first and more arsty and it seems to have given him credibility.

And Jagger's and Bowie's films were egotistically centered around them as personas. Kristofferson didn't typecast himself.
Administrator
"filmboards is a bold experiment in free speech and anarchy"
I GameBoy

Member since May 15, 2018
The Man Who Fell To Earth and Performance are both superior films but also happen to be their first and best films, probably because they were used more for their image than for their acting range. Kristofferson has an image better suited to cinema and also happens to be a good actor.

You remember those old pictures I posted of me with a beard during the 1980s? The reason why I shaved it off was because I saw Kristofferson in a film called Trouble in Mind and realised I’d never look as good as that. Recognise the other actor? 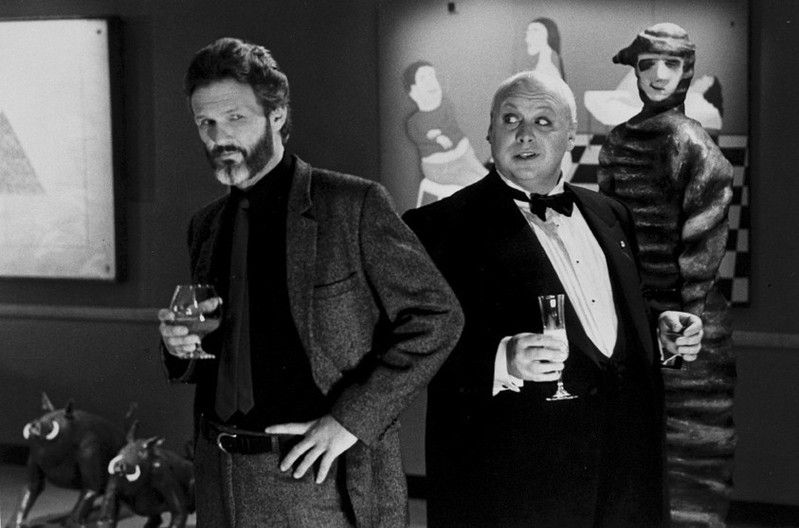 Member since September 30, 2017
Divine, right? Interesting how a rather frumpy ordinary looking man can become so frighteningly outrageous in drag!

I never saw Performance. I saw "Man Who Fell" and it was good but just didn't blow my mind. My point about Bowie playing his own persona was that he played an alien like his character onstage. I was disappointed with Bowie in film because he was a musical genius but as an actor he was rather average. I guess I expected Ziggy Stardust and he didn't deliver.
Administrator
"filmboards is a bold experiment in free speech and anarchy"
I GameBoy

Member since April 16, 2019
I really liked The Man Who Fell to Earth. It's a slow burn, but what didn't you like about it.

As far as Bowie movies falling flat, you didn't like The Hunger?
"Miss Edith speaks out of turn. She's a bad example, and will have no cakes today." ~ Drusilla

Member since November 16, 2019
I've seen the uncut version too. When Bowie reveals himself to Candy Clark she pees on the rug

When Candy's crying, she has snot running out of her nose
If we take the time to see with the heart and not with the mind, we shall see that we are surrounded completely by angels ~ Carlos Santana

(Maybe you're exempt?)
"Miss Edith speaks out of turn. She's a bad example, and will have no cakes today." ~ Drusilla

Member since April 16, 2019
What? I'm simply saying it happens and there's no need to get in a huff over it.
"Miss Edith speaks out of turn. She's a bad example, and will have no cakes today." ~ Drusilla

Member since May 22, 2019
Right. Not at all being passive aggressive about it.

Member since April 16, 2019
I'm being direct, as I was when I posted it. I've seen people post trailers in the GD section before. I have on occasion posted in the movie boards but the last posts were sometimes a year or even a two, so what's the point, when no matter, still several replies are made.

I'm just looking to talk to current members, and not read posts that are years old. I made that clear, since I just don't get why this has to be such a gigantic issue with some people when I'm just here to have fun.

As I've said, up front, I'll stop posting trailers to movies in GD if they're so offensive and distracting despite that I've been doing it since I joined, and have seen others do the same thing. I'll stick to other topics.
"Miss Edith speaks out of turn. She's a bad example, and will have no cakes today." ~ Drusilla

Member since September 30, 2017
Oh shit, I keep forgetting. I'll go to that board and post something about Mishima. Lol.
Administrator
"filmboards is a bold experiment in free speech and anarchy"
I GameBoy