The Marvel Studios sequel, directed by Anthony and Joe Russo, earned over £2.3bn ($2.9bn) in revenue by Sunday, since being released in April. Avatar, directed by James Cameron, which was released in 2009, previously held the record as the highest grossing movie of all time , earning $2.79bn.

Our long national nightmare is over.

Member since May 9, 2019
This is such bullshit! Bullshit superhero movie!

Member since February 28, 2019
Every time this kind of article is written it ignores inflation. The real numbers: 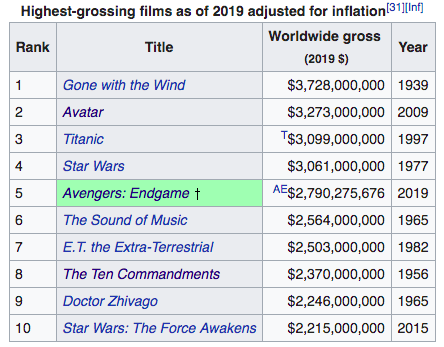 Member since July 16, 2019
Yep. Not only that, the difference between Avatar and Avengers: Endgame is that Avatar made that much as a SINGLE film while it took several Avengers/spinoff movies to make that much. And yes, everybody knows about the reason Avatar made that much is because of two rereleases and 3D ticket prices as well as six months running, yada yada yada, but it doesn't change the fact that Avatar did very well as a single film as opposed to sequel in a superheroes series.

And I love both Avatar and Avenger so there's that.

This hypersexual teddy bear is waiting in your closet at midnight. Prepare yourself.

Member since July 24, 2019
just wait till titanic 2!
I can smell your feet through your shoes

Member since June 26, 2018
Avatar is the most overrated film of all time.
"You had me at Elk Tartare"
-Erin Wotherspoon

Member since March 7, 2020
I refuse to watch it. It just does not appeal to me.
❤️️ "True friends are like stars, you don’t always see them but they are always there.” ❤️️

Member since June 26, 2018
It’s treated like an all time great movie and really isn’t all that . I never understood the hype around it . James Cameron’s best film will always be Titanic to me .
"You had me at Elk Tartare"
-Erin Wotherspoon

and Terminator and Aliens lol
❤️️ "True friends are like stars, you don’t always see them but they are always there.” ❤️️

Member since September 1, 2018
The Abyss is underrated, and a really excellent movie.

Member since March 7, 2020
👍 There are moments in that movie where I tear up.
❤️️ "True friends are like stars, you don’t always see them but they are always there.” ❤️️
▲ Top